Types of Anemia in Dogs 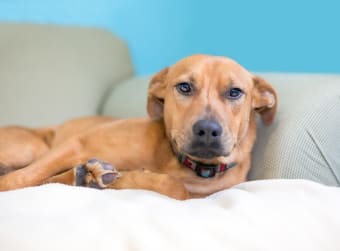 When dogs are diagnosed with anemia it means that there is an underlying condition threatening your dog's overall health. Today our Somerset vets explain the different types of anemia seen in dogs, as well as their symptoms of anemia and how it can be treated.

In dogs, anemia is a condition that indicates that your pet is suffering from an underlying disease or illness. Anemia occurs when your pet's body isn't producing enough red blood cells or hemoglobin, or when your dog suffers severe blood loss due to conditions such as cancer, or stomach ulcers, or if your dog has experienced trauma such as a serious accident or injury.

The different types of anemia seen in dogs each have their own unique cause and treatment will depend upon the cause of your dog's condition.

Blood loss anemia occurs when your dog has experienced severe loss of blood due to an injury, surgery, or a bleeding disorder. This form of anemia could also be caused by internal bleeding due to cancer, ulcers, parasites, or other health conditions.  Anemia caused by blood loss is a form of regenerative anemia. This is because although the bone marrow responds appropriately to the decreased number of red blood cells by increasing production it is unable to meet the demand.

Immune-Mediated Hemolytic Anemia in dogs - also called IMHA for short - is an autoimmune condition in which your pet's body attacks its own red blood cells leading to anemia and the need for blood transfusions. This serious condition can lead cause the formation of blood clots in the brain and lungs in some dogs.

This form of anemia comes in two types:

Aplastic or Non-Regenerative Anemia in Dogs

Aplastic or non-regenerative anemia develops in dogs due to insufficient production of red blood cells. This form of anemia can occur due to toxin exposure, bone marrow disease, kidney disease, certain medications, chemotherapy drugs, or parvovirus.

Methemoglobinemia in dogs is caused by too much methemoglobin in the blood due to certain genetic disorders, or exposure to toxins including a number of different medications meant for human use only such as ibuprofen, acetaminophen or benzocaine.

Signs That Your Dog May Be Anemic

Dogs suffering from anemia can display a variety of symptoms depending upon the type of anemia they are experiencing. Some of the most common symptoms include:

Common Causes of Anemia in Dogs

There are a number of conditions that can result in your pup developing anemia. Some of the most common causes of anemia in dogs include:

Treatment for Dogs with Anemia

If your pooch is diagnosed with anemia, the treatment that your vet prescribes will be based upon the underlying cause of the condition. Common treatments  for anemia in dogs include:

The prognosis for dogs with anemia depends upon the availability of effective treatment for the underlying illness. Severe anemia in dogs can indicate a very serious or possibly fatal condition such as poisoning, cancer or an autoimmune condition. If your pet is showing any signs of anemia contact your veterinarian as soon as possible to book an examination.

Preventing anemia in your dog relies upon preventing the conditions that cause anemia (where possible). Parasite prevention medications year-round can help to protect your dog against diseases spread by ticks, fleas, and worms which can lead to anemia.

Keeping toxic substances such as human medications and foods far out of your dog's reach as well as providing your dog with a healthy diet, may also help to prevent your dog from developing anemia.

If your canine companion is a breed that is susceptible to developing anemia (Shih Tzus, Labrador Retrievers, Miniature Schnauzers, and American Cocker Spaniels) regular wellness examinations twice yearly at your primary care veterinarian may help to detect the signs of anemia early, and provide treatment before the condition becomes more severe.

Note: The advice provided in this post is intended for informational purposes and does not constitute medical advice regarding pets. For an accurate diagnosis of your pet's condition, please make an appointment with your vet.

If your dog is showing signs of anemia contact our Somerset vets right away to schedule an urgent examination for your dog or visit a 24/7 animal hospital for emergency care.

Spinnaker Veterinary Clinic welcomes cats, dogs, and their people to our clinic! Our experienced vets are passionate about the health of Somerset companion animals. Get in touch today to book your pet's appointment.

To Our Valued Clients,

With the significant decrease of the Omicron variant, effective Monday, March 28th, Spinnaker Veterinary Clinic will be allowing 1 ADULT ONLY to accompany their pet when scheduled to see the veterinarian.  We will still require that masks be worn and need to cover both nose and mouth.  Of course, we will be happy to continue curbside service for those clients who request it.

Spinnaker had several team members impacted by Covid along with pet parents who had brought their pets in to be seen and notified us that they were Covid positive.  Currently having only one veterinarian seeing patients, this previous exposure forced us to close for a week; additional exposure would require us to close the clinic again, denying medical care to all of our patients.  The masking policy we have established seems the most prudent course of action at this time to manage any risks.

Appointments with a technician, medication, and food pick-up will still remain curbside.

We ask that when possible, please give the clinic a 48-hour notice for medication and food refills.

We look forward to seeing you again and thank you for your patience.